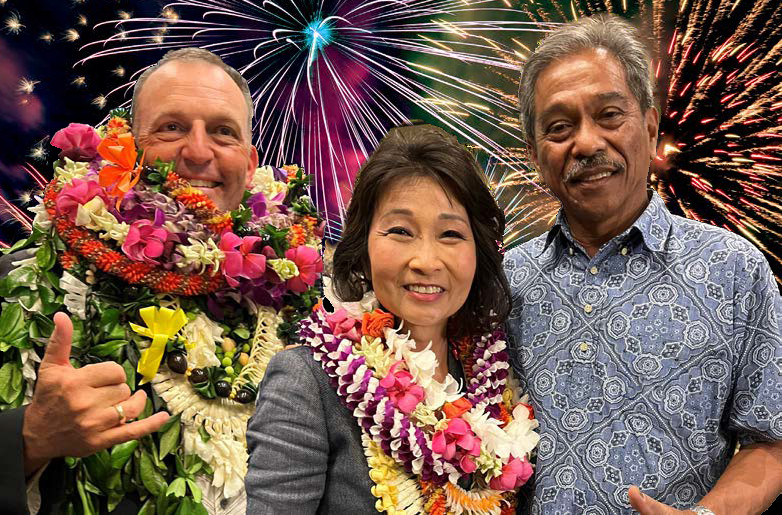 The year ended with a victorious bang with our Union supported candidates winning the election, Governor for the State of Hawaii, Josh Green, and Hawaii Lt. Governor, Sylvia Luke. Local 675 was one of the first unions to support Governor Josh Green and the first union to support Lt. Governor Sylvia Luke. At their campaign headquarters, they both let me know they appreciated Local 675’s early support.

I would like to take this time to again thank the membership for participating in the first Union mail-in voting for Local 675 election of officers. The mail-in ballots gave members every opportunity to cast a vote and have a voice, especially those not able to vote in person including neighbor island members. I want to thank you again for your confidence in allowing me and my fellow officers to continue working for you and moving this Union forward!

Last month, there was an election for various Union board positions – one for the Executive Board, one for the Finance Committee, and one for the Examining Board. Being that only one nomination was received for each position, a White Ballot was cast. These positions will be for a two-year term as directed by the UA, so that all elected positions will expire at the same time in 2024. I want to extend my congratulations to Brother Dean Kobashigawa on the Executive Board, Brother Doug Kekona on the Finance Committee, and Brother Dean Luna on the Examining Board.

There were leadership changes on the UA level last year. Brother Derrick Kualapai, who was the International Representative for Hawaii and California, was promoted to the UA’s Administrative Assistant to General President Mark McManus. Brother Aaron Stockwell out of Local 447 Sacramento, California became our new International Representative. He and I met several times at UA meetings and most recently in November when he came to visit our local. I feel he will be a good representative for us.

I attended the Business Manager’s Seminar in Maryland which was held in September. The business managers from all over the U.S. and Canada were in attendance to listen and meet with UA President Mark McManus and the UA Directors of the various departments. The UA stated there will be 816 billion dollars of work in the industrial sector, with emphasis on Micro Chip Plants, Pipe Distribution, and Power Plants. They said we need to organize more skilled workers to accommodate the future manpower needs. That was the number one directive from the UA -- for each union to focus on Organizing. I had our business agents attend the Blitz Organizing workshop, which was hands-on organizing in Seattle. Recruitment and retention were the main focus and pushing good wages, good benefits and good working conditions are always the selling points. The UA also focused on getting the political pro-labor candidates in to leadership positions and becoming our allies for Union support. I think we are already ahead of the game.

In November, we had a very informative presentation for the Medicare Retirees at the Oahu Veterans Center, Sullivan Hall. The discussion was regarding the switch from HMSA Akamai Advantage Plan to Humana Medicare Advantage Plan, which took effect January 1, 2023. (See article on page 6.) This move saves the Funds money as well as each individual medicare retiree under the new plan.

During the month of December, we were finally able to hold our Holiday dinners on the neighbor islands and on Oahu. It was a time to celebrate but also a time to remember and honor those members who came before us and have recently passed. I gave remembrance and a moment of silence to our great Local 675 leader, Herbert S. K. Kaopua, Sr., a true pioneer who contributed so much to our Union. We were also able to celebrate the service award recipients in attendance and honored their contribution, dedication, and support. It was good to see old friends and comrades.

Looking ahead, we will continue to organize to keep our Union strong and continue to ensure the best working conditions and benefits for you and your family. We will be working hard for you and appreciate the support over the years. Please continue to attend our in-person monthy meetings to keep informed, and join us in celebrating our many family events.

As always, be healthy and stay safe and have a Happy New Year!