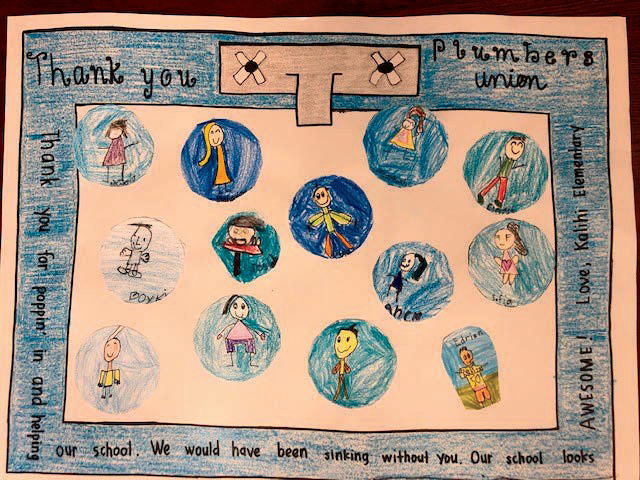 Business Agent Sam Barrett, Jr. beamed with pride when he received on behalf of Local 675,
the "mahalo" artwork from students of Kalihi Elemenary School

Each year the Hawaii State AFL-CIO, Labor Community Services Program chooses a public school to improve their campus through its "Labor of Love" event. This year there were 533 volunteers from various unions who came out on Saturday, January 25th to Kalihi Elementary School.

Kalihi Elementary School Principal, William Grindell mentioned that the heart of the school is the cafeteria where they hold community celebrations and functions, and hold their graduations. The cafeteria received new fans, a new paint job and a new dishwasher among other campus improvements. Business Manager Val Ceria stated, "With the help from Brother Sam Barrett, Jr., the Union was able to install the much needed dishwasher for the school's cafeteria." Brother Sam added, "Since the installation, Kalihi Elementary was able to convert to metal utensils for the students which will significantly reduce the amount of single-use plastics they go through." 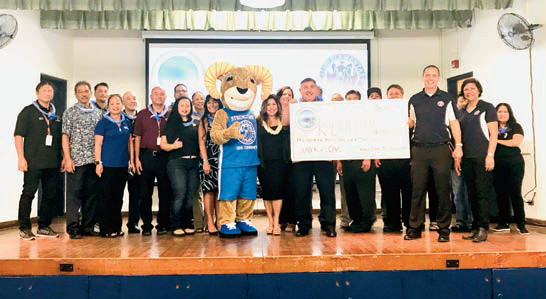 Bus Mgr Val Ceria and Bus Agent Sam Barrett, Jr. attended the Mahalo event at Kalihi Elementary School
for the "Labor of Love" Program sponsored by the Hawaii State AFL-CIO
The total value of the contribution to Kalihi Elementary School was over $130,000. Cathy Lederer who helped organize the event said, "It was amazing to see how much can be accomplished in a few hours when people come together!" Along with Cathy, Randy Perreira, President of the Hawaii State AFL-CIO, thanked the Union Affiliates and everyone who came out and gave back to the community.
Published: April 16th, 2020